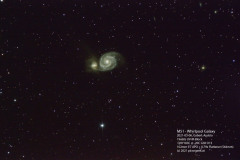 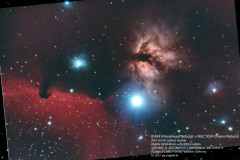 Last night, I captured several subs of the Rosette Nebula (NGC 2237). Most of the subs were in H-alpha. So the O-iii and S-ii data is a bit short in signal. But hopefully, one of the next nights will be clear to add more subs 🙂
The colored image is Ha = red, Oiii = green, Sii = blue. The one in black and white is the pure H-alpha image 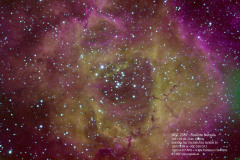 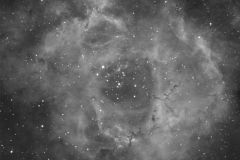 Even though the moon was at its brightest, I had to capture some light during the current phase of perfect weather. So I aimed for a rather dim nebula – Thor’s Helmet. I could capture a total of 124x300s images, which I combined to this nice result… 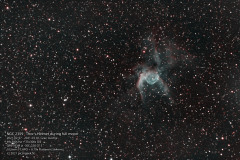 Here is another result from last weekend of fine weather. This is the Cone Nebula and Christmas Tree Cluster in NGC 2264, a beautiful H-alpha region.
The image is a 2 1/2 hours pure H-alpha recording. Therefore presented in black and white. 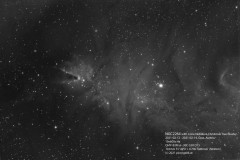 During the last few days there were really promising clear nights. I recorded several data sets from my urban location (under these conditions, going up the mountains would have been a treat!). Now, as there are clouds again, I am processing the captured data. Here is the first result from the Leo Triplet (M65, M66 and NGC 3628).
I still have not yet received my color filters. So here I have a combination of luminance (UV-IR-Cut), H-alpha and O-iii data. 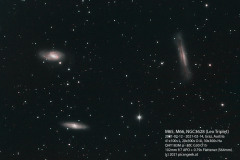 Finally, the clouds did break! After more than 2 months, this is the first chance to do some astro photography. It would have been a great opportunity to go up on one of my mountain observing spots. But with clear skies and a northern wind, temperatures dropped to -10C and below. So I stayed in the comfy warmth of home with urban light. Even though, narrow band images are still possible with quite long exposure times.

With the great Orion nebula, imaging is not too hard to accomplish, as the nebula is really bright. So a set of 110 exposures of 100s revealed the following image. Unfortunately, I could not completely remove the amp-noise from the camera as well as the uneven background. I have to improve my skills in post processing 😉 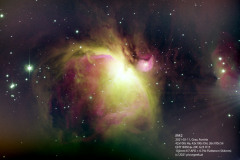 Last night I could capture a few light frames of M27. The 3 individual small narrow filtered images were combined in Hubble-Palette colorization