On Sunday, May 1st, I was lucky to have the ISS transit the sun only a few kilometers away. Weather played with my plans as well. So i packed my solar scope and drove to a place right in the center of the transit line.
The transit itself is a very brief event. This particular one lasted for less than 2 seconds. So everything hat to be well set up before the clock reached 08:24:22 CEST.

This image is a combination of 15 individual images captured in 1.02 seconds. The solar surface was further enhanced by a stack of 880 frames adjacent to the transit itself. 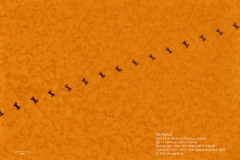 On Thursday 2020-10-22 in the evening, I captured image sequences of Mars (see seperate post). During one of the infrared test sequences (I wanted to compare noise levels at +2C vs. -20C) I saw a brief dark shadow passing the disk of Mars. First out, I thought it might have been a bat. But later on, when I analyzed the video, I found out, that the shadow was a satellite transiting Mars 🙂

I definitively was very lucky to have registered the shadow during capture time. Otherwise I would never have seen this event in post processing…

Today Mercury set its path in front of the sun. The tiny black spot was a nice view to observe. As I was in the office that day, I used a tripod, 1000mm lens and a wired remote trigger to capture a few impressions of the event: 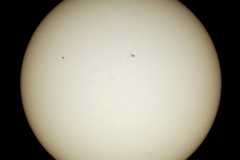