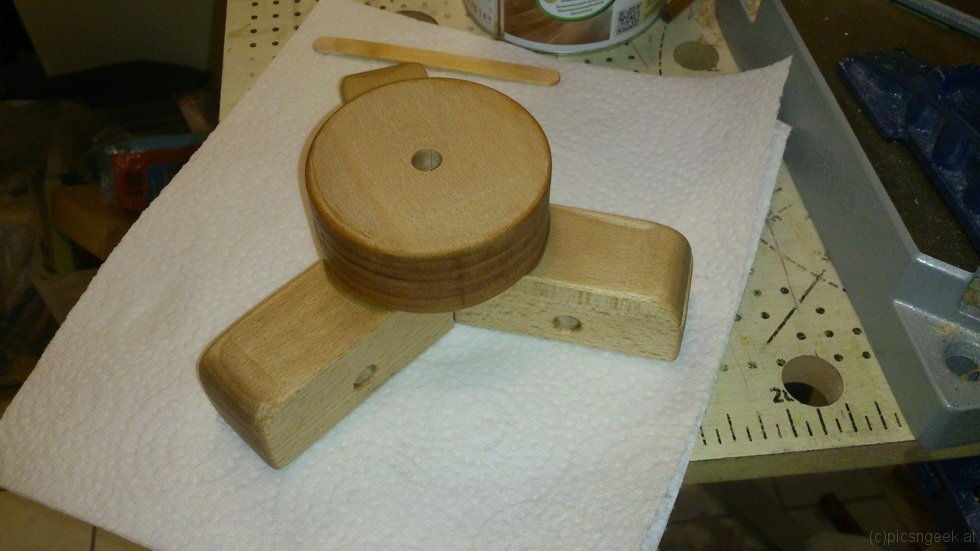 Several years ago I purchased my first telescope. The telescope had an EQ2 mount included. The EQ2 is an entry level mount, with an all in one mount and tripod base. The EQ2 served me for some time, until I got frustrated with the instability and bad and worn gears in my unit. So one day I replaced it with a goto mount. The last time I used it was for the 2006 solar eclipse in Turkey. Since then the whole thing had to sit and wait for a long time in the basement.
Several years passed until I added a Sky-Watcher Star Adventurer to my collection of gear (I am really happy with this little travel mount!). To use the Star Adventurer in its full extent, a sturdy tripod is required.
None of my photo tripods (neither aluminium nor carbon fiber) could provide a rigid platform to hold against the vibrations of wind or camera mirror flip. After reading several comments on tripods for the Star Adventurer, the direction was obvious to use a wooden tripod. I was already scanning the market for proper tripods, when I remembered the EQ2, which had quite a nice wooden tripod. The only problem to solve was, to replace the EQ2 head with a flat base. The base should provide a stable means to attach the Star Adventurer with one UNC 3/8 screw…

The design was straight forward: The construction exists of 2 parts. A 3-prongue base to attach to the tripod legs and a raised platform for the Star Adventurer. As I didn’t have a large enough piece of beech wood for the base, I used a 40mmx40mm beech wood block. The block was cut in 3 equal parts. These are mitered at 60°. On the other side, I rounded the top part (a rather aestetical finish) and drilled the hole for the bolt attaching the tripod leg.
The platform consists of one round disc of 40mm thick beech wood, which I cut out with a 100mm circular drill. The 4 parts were then glued together with 2 wooden pins joining each leg part, to enhance mechanical strength.
After drilling the required hole for the UNC 3/8 screw and the recessed hole for the screw head with washer, the whole part was sanded, cleaned and finished with hard oil. The platform top face received a rubber coating for a better hold of the Star Adventurer.