During the last years I frequently ran into trouble with the stock Sony batteries. Neither of the camera – battery combinations I had, were capable of imaging more than approximately 4 to 5 hours (some cameras drained their batteries within less than 2 hours). So I tried to determine the optimum means of powering a Sony camera for several hours without the need to change batteries. Here is, what I came up with:

Option 1: Batteries with increased capacity
Several after market companies offer compatible batteries with increased capacity. These batteries are also offered at more than competitive price tags.
In my experience, most of these batteries do not provide the capacity as imprinted. There are units, which significantly exceed the stock batteries. But you may also get a battery, which is outperformed by the stock battery – even though it is offered at twice the capacity.
If you are lucky and you have a well performing battery, you may extend the time in operation by 10%-50%.

Option 2: USB power supply
Several – and at least the new models – have a USB port, which is capable of powering the camera during usage. This is a great way to have your camera last for hours. This is also a truly economic way, as you simply plug a USB power bank to the camera.
Be aware, that you may need a special splitter cable, to simultaneously run a trigger and the USB power supply through the Multi-Port connector! See here, how such a cable may look like: Combined charger and trigger cable for Sony mirrorless cameras like A6400
But to my experience with a Sony A6400, the USB port is not capable of providing sufficient power in heavy use situations. When I had the camera shoot 3000-7000 images in 1 second intervals, I ended up with a (almost) drained battery. So the camera was constantly discharging and charging the battery. The discharge rate was higher than the charging rate. This caused the camera to significantly heat up – which is highly discouraged in astrophotography!
Further more, at least the battery is set under unneccessary stress.

Option 3: Vertical Grip
The majority of the higher end and high end cameras may be equipped with a vertical grip unit. The vertical grip units are typically fitted to the battery slot instead of the battery. To power the camera, the vertical grip incorporates a tray for 2 battereries. This doubles the capacity possible. But depending on the camera, if you keep the remote trigger port constantly in focus / pre-fire mode, the camera may not switch to the second battery. So you may end up with a camera in power-safe mode and an exhausted battery as well as a fully charged one…
Further more, you have to keep in mind, that the vertical grip units are quite heavy (adding a couple 100g in weight). This may be an issue to your setup!

Option 4: External power supply
Some Sony cameras have a power in connector. This is a proprietary connector, which was already in use back in the Konica/Minolta aera. The connector is flat, with both poles on the opposite sides. On one side, there is a small bar, to prevent reverse plugging. So, technically, no big deal. Unfortunately the connectors are not available individually. But nowadays, you get really cheap power supplies with matching connectors online.
If you are a DIY person: it is really easy to build or use such a connector; Simply provide 7.2V from a mains supply, step converter or lithium batteries ;-).
To my experience, in-camera batteries are disconnected from the camera, when you plug in the external supply. So, if you plug or unplug the external supply, the camera restarts. If you leave the plug in the camera and cut the supply voltage, the camera is not operable (due to disconnected battery)

Option 5: Battery dummy
Dummy batteries are a great sollution for long lasting scenarios. You replace the camera battery with a plastic dummy, which has a DC plug. You simply provide 7.2-8V from any means of power supply you have. This may be a mains adapter, USB power bank with step-up adapter, a 12V car socket with step-down adapter or a lithium battery pack with 2 batteries in series. There are even some dummy batteries with included USB to 7.2V converter. But they may lack the power neccessary to drive the camera (some cameras are specified with 7.2V 2A input, which is way above the typical extended USB power scheme of 5V 2.1A.
As there are so many ways to provide the power needed, it is a very versatile option. But you have to be careful in selecting the right dummy. Some dummy units do not lock perfectly in the battery slot. So the dummy may fall out of the camera, or it disconnects. Some may have very stiff cables, which pose a lot of stress to the battery compartment lid (which is a true pain to replace!)
Hints:
– You may never want to charge the dummy battery! This may pose a high risk of damage!
– provide a well stabilized, battery-like voltage for best performance
– if the dummy disconnects or is not supplied, the camera is off immediately

Summary
Depending on the situation, I choose any of these options – or even stick to replacing the batteries frequently. But my personal favorite for long lasting sessions is Option 5 in combination with a 2S 2P or 3P lithium pack (2 or 3 parallel, 2 in series). This power pack provides 7,4V straight off (no converter needed) with far more than 4 times the capacity of the stock battery. Up until now, I never ran into drained batteries, even under -10C conditions after 10 hours shooting.

I often capture time lapse image sequences and do astrophotography. In both applications, a trigger cable and a proper means of powering the camera are essential. Keep in mind, that a fully charged battery usually lasts for no more than 3 hours.
At the moment, the only way to power a Sony mirrorless camera for a whole night or several hours is a dummy battery attached to a power supply (be it a mains power supply or a 7.2V battery driven sollution). With the release of the new models recently, like the A7III or A6400, the camera may also be powered through USB charger during image acquisition. (It may still be possible, that the battery drains, but far far less.)

This is really good news, as a USB power bank will provide the juice to run a whole night or even longer! But there arises one new problem: The external trigger remotes use the same USB port as it is used for charging.
This is possible, as Sony has created the so called Multiport some time back for use with their video cameras. The Multiport is an extended Micro-USB port with a second row of contacts. These contacts provide access to some control as well as audio and video output.

I did some research and came across Multiport connectors with solder pads for all 15 pins. See the pinout in the images at the end of the post.

With such connectors I was able to tailor a dual cable adapter, to charge and trigger the camera at the same time! I took a USB cable with male type A connector and a headphone extender cable with male 3.5mm plug. I chose both cables around 1m in length. This should be long enough in most use cases, but not too long to reduce charging performance.

The 3.5mm plug fits some of my trigger devices. All the others have 2.5mm plugs, for which I have adapter calbes in use. Most computer timer remotes with interchangeable camera plug sold, have a 2.5mm female audio jack. See attached image for the typical pinout.

Soldering the two cables to the tiny solder pads requires a steady hand and experience in soldering. The USB as well as the audio cables have quite thin wires (AWG26 to AWG28, which equals to 0.12 mm² to 0.08 mm²), except the USB power wires (AWG22 or AWG24 in quick charge cables, which equals to 0.32 mm² and 0.20 mm²). The wires are rather stiff. Therefore, aligning the wires to the solder pads may be tricky. It gets especially tricky, if the wires are exposed from the outer isolation for less than a centimeter.
Advice: Always check the finished cable for shorts and proper contact with a multimeter!

To reduce wear, which may lead to wires breaking off the solder pads, I designed a connector housing / case. The housing holds the adapter as well as the cables in place. Furthermore, this is the only proper way to handle the connector upon pluggin to / unpluggin from the camera.
The connector case is 3D printed. I share the STL file on Thingiverse here:
https://www.thingiverse.com/thing:4279366 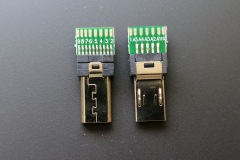 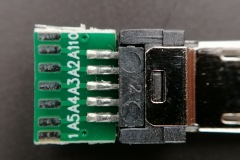 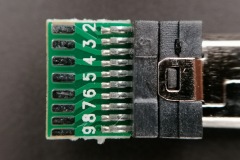 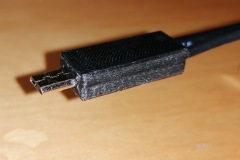 Disclaimer:
This is a guide put together as reference for me. If you follow this description, you will do so on your own risk. I may not be held responsible for any damage or injury caused!